Last week’s announcement of the largest interest rate hike by the Federal Reserve in 28 years — obviously causes concern for anyone wanting or needing to borrow money. Whether you’re in the market for a new car or a new home, the move could very well stop consumers dead in their tracks for fear they simply won’t be able to afford the higher costs.

For the furniture business, that — along with the prospect of future increases — is causing alarm as home sales are tied to peoples’ desire to purchase new furniture. It also falls on top of what industry sources have already described as a sudden and brisk slowdown in furniture purchases at retail. While spending has not stopped completely, it probably feels that way to some compared to the high levels of demand seen during the pandemic.

Evidence of that also has been seen in recent Commerce Department reports that furniture retail sales are among the slowest growing of any category the agency tracks as we’ve reported here.

Obviously regular inflation on finished goods, along with gas and food prices haven’t helped, which is a key reason for the Fed’s action — to curb inflation. But the move could take a while to have the desired results, especially as outside factors beyond our control such as the Ukraine war continue to put pressure on things like fuel — and even food prices — due to the impact on grain supply from the Ukraine.

And we haven’t even mentioned the word recession yet, which continues to lurk around the corner.

But is the news all bad? Not by any stretch, particularly for the home furnishings industry. One major positive is that home ownership remains relatively strong. According to research from Statistica the homeownership rate in the U.S. was  65.5% in 2021. While down from a previous high of 69.2% in 2004, it’s also risen at one of the fastest rates on record during the past couple of years.

And even during prior years of decline, it didn’t seem like the furniture industry fared too poorly as sales continued to rise, thanks in part to the greater awareness and interest in furniture created by major brick and mortar and e-commerce players alike. That interest obviously peaked during Covid as people sheltered in place and began to invest more in their homes.

However, investing in one’s home doesn’t need to stop just because people can’t afford to trade up right now. That’s been a fallacy that perhaps has held back the industry in the past. Opportunities to update one’s living space abound, whether we’re talking about refurbishing a kitchen or bathroom or  buying a new living room set, complete with home theater seating, entertainment console, some new occasional tables and even a TV. (note the TV gets last place on this list). And what about the guest bedroom that hasn’t been updated in years, much less the master suite?

And we haven’t even touched on people moving into apartments which are being built all over the country. And many of these beautiful, upscale dwellings need to be furnished too whether it’s a bedroom, a sofa or a kitchen set.

However, this demand for loans will also likely continue even as rates continue to rise as people wish to get the best deal possible.

The question is, will the furniture industry sit back and let these types consumers pass them by? We hope not because obviously the demand at places like home improvement stores isn’t likely to falter anytime soon. Been to a Lowe’s or Home Depot lately? If not, go on any weekend day and you’ll see they’re both teaming with customers.

And that may be partly due to a well-known slogan in the industry — Never Stop Improving — that has become almost a mantra for anyone living under a roof.

We’ve said it here before and we’ll say it again. Perhaps the furniture industry needs a similar slogan, something like Never Stop Furnishing or Keep on Furnishing. Perhaps there’s a better one out there, but we all could benefit from a national marketing push right now. When demand slows, you don’t want to stop marketing to your customers whomever they might be. Otherwise, you might as well all expect to watch that business walk out the door. 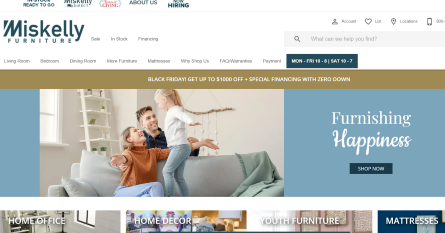 For some, Black Friday continues a run of holiday sales successes