Founded by a small group of industry veterans, the company will have over 4,000 products immediately available for purchase for June High Point Market and half available at premarket.

In 2019, a group of industry veterans from Italy and the U.S. joined forces to start a new furniture company from scratch. The goal was to do something new, high-end, and special by blending Italian and American design.

Now, after two years of research, development, and production, the new whole-home furnishings company, Casa Ispirata, will make its debut at the upcoming High Point Premarket.

At the helm of U.S. operations is Randy Wells, an industry insider who has spent his whole career in the home furnishings industry, previously working at companies such as Bassett Furniture, Century Furniture, and International Market Centers, among others.

Wells says Casa Ispirata will introduce 25 individual pieces in three to five finishes at the High Point Market, and half of those products at premarket, but there are nearly 4,500 pieces of furniture ready in their warehouse, on the water, or finishing production.

“We used to have a thing where people would go to market and look at furniture and, if they liked it, manufacturers would issue a cutting” Wells explains. “The world just doesn’t work that way anymore. People want to see things they can buy now. People’s attention spans have shrunk. Try watching a movie from the ’80s and one made last year—they’re two totally different things.”

He says that the company wanted to be in a position where its interior designer and retailer customers—and their customers—can have what they want when they want it. “You can’t sell what you don’t have,” he adds. “And because this is upper-end furniture, we’re competing with disposable income—people thinking about a new car, a new kitchen, a Rolex, or soon, a luxury vacation.”

However, the pandemic did give the Casa Ispirata team time to work with their designs, which played out to their benefit.

“We have extraordinary colleagues in Vietnam, Hong Kong, and Italy,” Wells says. “And while the pandemic created its share of challenges, it did give us all time to work together—albeit via Zoom or Facetime—and ideate, design, critically analyze, sample and test until we made each piece the absolute best it can be. There are a number of designs in our launch collection that frankly would not have been possible during a traditional product development cycle.”

Designed in the U.S and manufactured in Vietnam, Casa Ispirata chairs are fully assembled during the manufacturing process, and the company uses performance-treated fabrics on all upholstered items. All drawer boxes are manufactured using English dovetail construction and exclusively feature Blum drawer glides, and all drawers feature a three-quarter extension soft-close drawer glide with a sixty-six-pound carrying capacity.

Casa Ispirata beds feature an adjustable platform design, which eliminates the need for a box spring and allows for a variety of mattress heights.

“Our entire team has poured their heart and soul into building furniture that we hope anyone would be proud to have in their home,” Wells says. “Our design language is born of our Italian-American provenance—in particular, the era between 1965 and 1995—and we believe there’s a certain magic in combining the brash confidence and energy of American design with the restrained elegance and austerity of modern Italian design.”

The company’s showroom is located in Interhall space IH104, across from the cafe, and Wells says he’s excited for people to see the furniture in person for the first time.

“We think that if you believe in it enough to get someone to write you a check for it, you better believe in it enough to make it, Well says. “So that’s just what we did. We see home interior design moving towards warmer colors and a quiet, casual sophistication that is both beautiful and easy to live with, and we think our product falls nicely into that category. 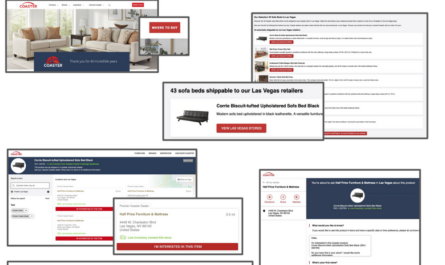 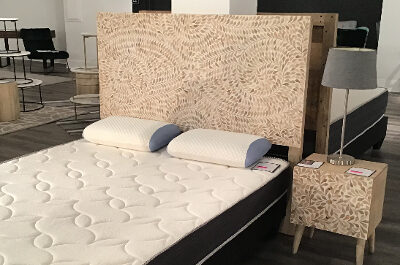 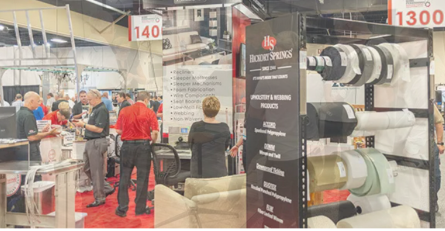