MONTREAL — The results of Dorel Industries’ latest earnings report for the second quarter ended June 30 illustrates how a drop in consumer demand combined with high inventories have affected the overall business, particularly in the furniture segment

The company also reported a net loss from continuing operations of $13.6 million in the quarter, or 42 cents per share. For the first half, the company reported an adjusted net loss of $40.8 million, or $1.25 per share.

The results exemplify the challenges the company — and the industry at large — have faced in recent months, although Dorel is unique in the sense that its European business has largely been impacted by consumer sentiment regarding the war in Ukraine for example.

In addition to war, the company said that inflationary pressures also contributed to the softened demand in Europe, particularly in the juvenile segment. And while it has received positive response to new juvenile products, a stronger U.S. dollar has dramatically reduced earnings.

On a positive note, the company said that Dorel Juvenile second quarter revenues were the strongest since 2019, overall with “excellent performance in the Americas” more than offsetting the declines in Europe.

The Dorel Home furniture segment didn’t fare quite as well.

Operating profits were impacted by the lower sales, the company said, as well as higher operating costs due to elevated inventories and higher input costs, largely from ocean freight.

The company said that despite raising prices to offset the costs, this was not enough to compensate for the increases, “as promotional activity was introduced to drive sales and reduce inventory levels going forward.”

“At Dorel Home the supply chain backlog cleared, thus we received a significant amount of inventory in the quarter,” said Dorel President and CEO Martin Schwartz. “At the same time there was a drop in consumer demand and orders as our retail partners also dealt with higher in-stock levels. This impacted earnings not only because of lower sales, but also higher operating costs. Both segments are carrying excess inventory due to the easing of the supply chain backlog and now we are focused on right-sizing our inventory levels across the balance of the year.” 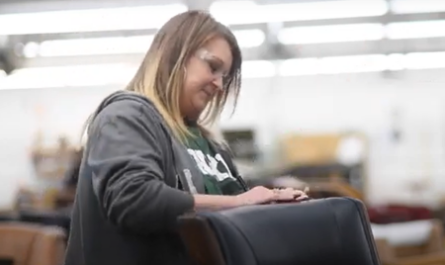